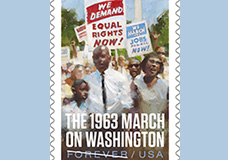 Equality has a stamp of its own. The U.S. Postal Service introduced the 1963 March on Washington limited-edition Forever stamp to commemorate the 50th anniversary of the historic milestone. For the first time, the Postal Service unveiled the stamp artwork with the help of people across the country. Throughout this month, individuals added their photo to the March on Washington stamp on the U.S. Postal Service’s Stamps Facebook page to help reveal a small piece of the stamp.

During the First-Day-of-Issuance ceremony at the Newseum in Washington, DC, actress Gabrielle Union added her Twitter profile photo to the mosaic to reveal the final piece of the 1963 March on Washington stamp.

“It is so appropriate and so fitting for the United States Postal Service to issue this Forever stamp on the eve of the 50th anniversary of the March on Washington,” said Lewis. “The march was one of the turning points in the on-going struggle for civil rights and social justice in America. In the years to come, when individuals use this stamp, they will be reminded of the distance we have come and the progress we have made as a nation. And they will be reminded of the civic duty of every American to stand up for what is right in our democracy.”

“It’s an honor to be here in remembrance of the 50th anniversary of the 1963 March on Washington and dedicate a stamp that commemorates what Dr. King described as the greatest demonstration for freedom in the history of our nation,” said Stroman. “The U.S. Postal Service takes pride in being able to recognize historic events by issuing these limited-edition stamps commemorating the ‘Best of America.'”

Fifty years ago, on Aug. 28, 1963, nearly a quarter of a million people came together in Washington, DC, to participate in the March on Washington for Jobs and Freedom. It was then that Dr. Martin Luther King, Jr., delivered his powerful “I Have a Dream” speech on the steps of the Lincoln Memorial, a defining moment of the American Civil Rights Movement.

The 1963 March on Washington stamp is the last of three stamps issued this year as part of a civil rights series commemorating courage, strength and equality in America. The first Forever stamp marked the 150th anniversary of the Emancipation Proclamation in January, while the second Forever stamp honored Rosa Parks on the 100th anniversary of her birth in February.

An inspiring word appears in large type in the selvage of each civil rights stamp pane: “Freedom” on the Emancipation Proclamation stamp sheet. “Courage” on the Rosa Parks stamp sheet and “Equality on the 1963 March on Washington stamp sheet.