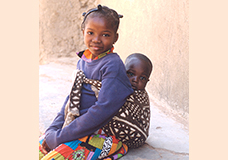 Though African-Americans make up only 13.6 percent of the U.S. population, they continue to suffer disproportionately from hunger and poverty. As of 2010—the most recent year for which data is available from the U.S. Census Bureau—nearly one-third of African-American households with children struggle to put food on the table. 2011 data will be released next month.

Similarly, one in three people in sub-Saharan Africa—a region about the size of the entire North American continent—suffers from chronic hunger. To emphasize the importance of African-American support for anti-hunger and anti-poverty initiatives in Africa, the analysis compares the states of Virginia, Texas, and Ohio to the African nations of Liberia, Tanzania, and Malawi.

Less than one percent of the U.S. budget goes toward poverty-focused foreign assistance programs. However, these programs save more than 1 million lives annually, promoting sustainability and self-sufficiency.

“Our experiences may be similar but the degree of suffering in African nations is staggering,” added Rev. Boykin. “Cuts to anti-hunger and anti-poverty programs would have devastating impacts on vulnerable people in the United States and around the world. These programs save millions of lives by providing people with the necessary tools to help lift themselves out of poverty.”

To support mutually beneficial partnerships for the United States and Africa, Bread for the World formed “African American Voices for Africa,” a network of leaders calling for the empowerment of African people by advocating for policies that eradicate hunger, poverty, and disease.