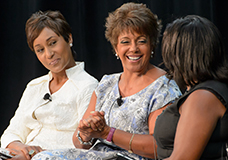 This event spoke directly to ELC’s mission and aspirational goals, a recently launched effort to promote corporate diversity. Over the next five years, the ELC will work with corporate America to add at least one African American at the CEO level or one to two levels below at each Fortune 500 company for a total of 500 and to increase the number of African Americans on the boards of publicly traded companies by 200.

“The ELC is a national organization of current and former African‐American CEOs and senior executives at Fortune 500 and equivalent companies, and we develop the next generation of African-American business leaders from the classroom to the boardroom,” said Ronald C. Parker, interim president and CEO. “Our goal is to make sure that African Americans have a seat at the decision-making table in corporate America, and that includes African-American women. This group will play an important role in bringing diversity of thinking to the table which spurs innovation and leads to stronger, more profitable corporations and better communities.”

The ELC is taking the lead on elevating the issue of corporate diversity because recent statistics have raised concerns about minority representation, specifically for African Americans, at the senior levels in Fortune 500 companies. In fact, key statistics demonstrate that African-American women are extremely underrepresented:

“I was honored to welcome this distinguished group of women to Minneapolis,” said Laysha Ward, president, community relations for Target, and board chair of The Executive Leadership Foundation. “The Women’s Leadership Forum is a great way to help build our pipeline of corporate leaders. With a focus on Potential. Purpose. Power., we will provide critical tools to help African-American women executives tap into their promise and power as they advance in corporate America.”

The first ELC Women’s Leadership Forum was held in October 2003 in Washington, D.C., for ELC members active on public policy issues.  Since that time, the forum has grown, and host cities have included New York, Chicago, and now Minneapolis.  In addition, the forum’s mandate and reach have expanded, with the focus primarily on leadership development, and it is now open to all high potential African-American women business leaders.

“During the forum we hosted  a range of leadership development workshops and panels, and we brought together some of the most powerful women in business, politics and academia to share their professional playbooks for succeeding in corporate America,” stated Leilani Brown, vice president and chief marketing officer for Starr Companies, and Women’s Leadership Forum co-chair. “Today’s forum helped us prepare talented and creative African-American women for leadership positions in corporate America and on boards, ensuring that we have a voice at the decision-making table.”

About The Executive Leadership Council

The Executive Leadership Council is an independent, non-profit 501(c)(6) corporation founded in 1986, comprised of current and former African-American CEOs and senior executives at Fortune 500 and equivalent companies. For more than 25 years, the ELC has worked to build an inclusive business leadership pipeline and to empower African-American corporate leaders to make significant and impactful contributions in the global marketplace and their communities. Our programs develop future business leaders, filling the pipeline from the classroom to the boardroom.