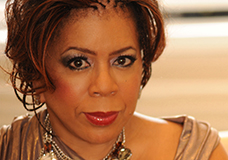 Lincoln Center’s  Out of Doors concerts, which runs until August 12, will feature 100 free performances across the plazas of Lincoln Center. On August 10, Valerie Simpson and friends pay tribute to Nick Ashford, in a concert featuring the legendary duo’s most indelible hits.

Valerie Simpson, of the legendary songwriter/producer/performer team Ashford & Simpson, will lead Valerie Simpson and Friends: Tribute to Nick Ashford in Damrosch Park. The beloved duo responsible for “Ain’t No Mountain High Enough,” “Ain’t Nothing Like The Real Thing,” “Reach Out and Touch (Somebody’s Hand),” “I’m Every Woman,” “Let’s Go Get Stoned,” “Solid (As a Rock)” and other era-defining tunes, also wrote and/or produced hits for a “Who’s Who” of music stars including Marvin Gaye, Tammi Terrell, Ray Charles, Diana Ross, Whitney Houston, and Chaka Khan. Their concert debut as a duo took place at Lincoln Center 40 years ago as part of “Soul at the Center”.

On the heels of her just-released solo album, Dinosaurs Are Coming Back Again (a project she and Ashford had worked on for a number of years), Simpson salutes her work- and life-partner who died last year, alongside a line-up of artists associated with the Sugar Bar, the Upper West Side hot spot owned by the couple.