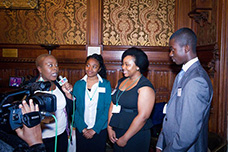 In 1987 Diane Abbott made history by becoming the first black woman ever elected to the British Parliament. She has since built a distinguished career as a parliamentarian, broadcaster and commentator. The London Schools and the Black Child (LSBC) is an initiative that the honorable Diane Abbott set up more than 10 years ago to address the fact that young black children still do poorly in London’s schools. According to Abbott, “They (the students) also suffer from a very negative perception in the media – especially so since the riots last year. The LSBC awards last month were a chance to counter that stereotype and reward high achieving black students.”

“All the nominees were of an extremely high standard and show that young people can be high academic achievers,” adds Abbott. “I would like to congratulate all of those who were shortlisted for an award, but especially Joel Oyelese, Lauren Wright, Haydn Kankam, Sonia Mason, Adam Elliott-Cooper and Chinazam Nwonkonkor the winners on the night.”

There were a host of celebrity faces on the night including Sir Trevor McDonald, Ledley King, Christine Ohuruogu, Louise Hazel, Lemn Sissay, Ruby Turner, Sarah Jane Crawford and Clive Myrie. “The guests of the night are proof to all of our young nominees that if you work hard then the possibilities are endless,” says Abbott.

“Like myself everyone was hugely impressed at the quality of the nominees. They are all full of a huge amount of potential. I look forward to hearing about all the positive things that they will go on to achieve.

The work of the LSBC is something I want to continue to champion because there is still much work to be done to improve education standards and make sure our young people have opportunities and continue to take advantage of those opportunities.”