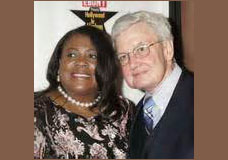 Roger Ebert’s life and prolific career was remembered during a memorial tribute at the Chicago Theatre . in Chicago, Illinois.This special evening included  several great moments from the beloved TV show “At the Movies,” and personal tributes from his wife of 22 years, Chaz, and granddaughter, Raven.

Ebert’s long relationship with the Chicago Theatre, where he attended film screenings for years, made it a fitting venue for an event celebrating a man dubbed “the world’s film critic.” Ebert also has the only star on the sidewalk in front of the theater beneath the grand marquee.

The Chicago Sun-Times critic of 46 years died April 4 after a decade-long battle with cancer. A day earlier, he had announced on his blog he was re-launching his Web site, RogerEbert.com (http://rogerebert.com/ ), but taking a “leave of presence” and “reviewing only the movies I want to review.”