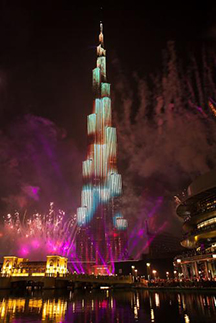 Ahmad Al Matrooshi, Managing Director of Emaar, said: “The Downtown Dubai New Year’s Eve Gala is a symbol of Dubai’s positivity and its ability to inspire, unite and bring happiness to people from around the world. The celebration brings hope and joy for a better tomorrow and a promising new era of growth here in Dubai, a global city that provides the opportunity and environment for business and personal growth.”

The ‘World’s Largest LED-Illuminated Façade’ around Burj Khalifa was the center of all glitz as it regaled the teeming spectators with one of the world’s brightest visual displays to date. The record-breaking LED display had an impressive 70,000 LED bulbs placed in position.